Stair Lift Prices are Monstrous - maybe, so look at this stairlifts firm from Stoke on Trent, Staffordshire

- Well, they can be, if you don't have a word with this national stair lift company originating from Stoke on Trent in Staffordshire. Whether you are looking for straight stairlifts or curved stairlifts, you have just discovered a very serious message.

After first smiling at the following - you may then find yourself shouting - 'Spam!’ - at the next chair salesperson that turns up at your house. You must have had quotes for new windows? Well, let's remind you what probably happened. 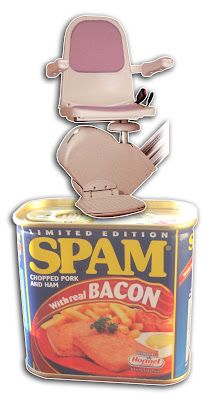 Be on your guard if they arrive wearing a suit and brandishing DVD’s, a bunch of flowers and a smile that suggests you are going to tempted into a ‘special offer’ for a chairlift lift that may still be much more than you need to pay. This double glazing hard sell approach is all to common in the mobility products business – and not acceptable at all when often older and maybe vulnerable members of society are alone to deal with such matters. Often, the chairlifts company seem more interested in selling it on the ‘never-never’ as more profit is always made in business when the customer can’t pay cash.

Remember, if a sales person in your home expects and entices you to an instant decision – just tell them you want time to think – and not just for twenty minutes whilst they sit outside in their car.
If the pressure is turned is on just politely ask them to leave. And they will. If they don’t, tell them you are going to call 999 and if they don't shift then - dial it! The police just love to responding to cries for help like that – it’s easy meat (or even Spam) for the boys in blue.
The price for a stair lift isn’t a secret these days. Just ask the firm on the phone or look at Castle Comfort's fact-filled website on the link here- castlecomfortstairlifts. Or you can phone any one of Castle's regional offices listed at the foot of this page. A free survey is needed to check there are no extras but all that is needed is a phone call to get the cost. Many firms actually put their guide prices in their press adverts – but be careful – the word ‘from’ can mean anything.

Castle Comfort’s ads carry an ingoing price for a straight reconditioned lift - installed and guaranteed. And they are always available. Get a quote for a ‘recon’ and a new one but with prices having come down tremendously in recent years – the difference may not be that great. This company with its HQ at Newcastle under Lyme, just north of Stafford has full UK coverage. The installation and technical back up - ie 24 hour emergency call out service is supported by the British manufacturers of stairlifts with which Castle Comfort deal.
How much does a stairlift cost?
If you are under 95 - and looking forward to the next few decades, a brand new one with all the latest features is well worth the bit extra.

It's best to get the options - then you decide. Another advantage with buying a new lift is that you will always get some money back on it if is to be sold one day. 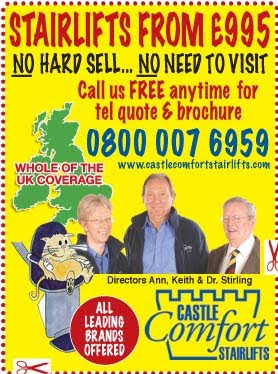 Back to Spam. This phenomena of chopped pork, salt water and sugar with a few added chemicals was first made in 1937 – and its maker American firm Hormel Food Corporation is now on its way to producing its eight billionth can! That’s a lot of butties.


Britain’s brave Armed Forces have survived on the variety of meals that can be produced with Spam, yet the 2nd Royal Welsh Guards refused to surrender in Afghanistan when the Taliban interrupted supplies for six weeks. See Daily Mail article by Luke Salkeld.

Apparently, Spam stands for ‘shoulder of pork and ham’ although intellectual connoisseurs of school dinners have more than once labelled it ‘something posing as meat.’
These days day however, junk emails that constantly bombard us computer-literate geeks since, have been given a new name. These electronic litter attacks – have assumed the name of our infamous canned snack. Was the label Spam taken from the Bill Gates glossary no .... Monty Python. What??? Indeed. The monotonous use of Spam in endless dishes – egg, bacon and Spam, sausage and Spam, bacon and Spam and the repetitious nature of such inspired a Monty Python mickey-taking sketch. This brilliant and now legendary sketch, see it here, was repeated so much at unwelcome times – that word was adopted to describe an endless boring sea of unwanted junk mails.

So now we now all about that can than has always been in the kitchen cupboard- who makes it, what it can be used for, and why its name was adopted in the world of computers. Who knows? You savvy stair lift shoppers may be bringing on a new use of the word. Remember, if it’s a hard sell, or the price seems over the top, yell ‘Spam.’
Happy chair lift hunting!

Castle Comfort can often advise on getting a GRANT for a curved or straight stairlift - and they can sometimes be obtained from unexpected sources. But see here how difficult that can be.
Finally, see this Daily Mail story here how not to market stairlifts. Not forgetting that the same care exercised when buying a stairlift - needs to be shown if you are selling one .............
This article demonstrates the risk of getting a cold call from someone you don't know offering something that appears to good to be true. And things too good to be true nearly always are.

October 2011 NEWS UPDATE  Even worse - if anyone actually turns up unexpected on your doorstep then it's almost guaranteed bad news. There will be a small chance of it being a genuine company with a genuine product at a genuine price, but read here what happened to Mrs Bell from Sheffield when she handed over £1800 at the door for a stairlift.

November  2011 NEWS UPDATE  - and it's porridge time  (not the kind you have with spam for breakfast) for two guys in the mobility products business.  It's bad enough training an already a dodgy salesforce how to behave - but publishing  a book on it  is asking for trouble!

December 2012 -  NEWS UPDATE -   double  porridge time for more scum bags. When these pair come out maybe they'll be old enough for a stairlifts and we hope they get the same treatment as they dish out themselves


Contact any of our stairlifts offices in these locations;


In addition, we have new stairlift offices opening in these locations soon;
Bournemouth, Bristol, Glasgow, Liverpool, Newcastle upon Tyne & York.
Find your local rep's telephone number now. We already have full sales and installation cover with 24 hour technical back up.
Also, we have full representative cover, continual stairlift installations, and 24- hour technical back up in these locations -


Finalmente, para los que hablan espanol, y estan buscando una silla salvaescaleras - vea estoCall Freephone 0800 007 6959 to speak to your local 'anti-spam' rep ! - and finally (for now) - isn't it nice when people go out if their way to say 'thank you' instead of the normal instinct to just moan when things don't go well - see what we mean here .. http://bit.ly/bHBGrw and here - http://bit.ly/auATK7