﻿
On May 30th the Olympic Torch reached Stoke on Trent and the next morning bright and early Keith Simpson the managing director of Castle Comfort was cheering with the crowds at the sight of the Olympic Torch being paraded through Burslem and down into Middleport. 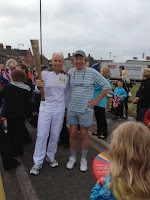 The last part of the Olympic Torch route around Stoke on Trent was along the A527, which if they had carried on running, instead of diverting to Crewe, would have meant that they would have carried the torch right past the Castle Comfort Centre in Wolstanton.


The Castle Comfort Group have a local association with running around Stoke on Trent, not least with delivering their riser recliner chairs, adjustable beds and stairlifts, but also sponsoring athletes to run in the Potters Arf Marathon.  See this blog where we sponsored Stairlift Stephen to run the route with a stairlift on his back.

The original lighting of the torch is done by lighting it from the suns rays at the Temple of Hera in Olympia in Greece, the historical birthplace of the Games. After a short relay around Greece, each Olympic year the flame then gets handed to a representative of the host country from where it is transferred around the country on a 70 day relay spreading a message of peace, unity and friendship.
The route of the Olympic Torch is designed so that it would pass within an hour of 95% of residents in the UK and you can see on the video below the actual lighting of the Olympic Torch in Stoke from one torch bearer to the next in Middleport.  Let's hope we get some golds in the Olympics!  Let us know in the comments if you saw the torch too.