Are you lucky enough to live in Hampshire or to live in or near Alresford, but need to source a stairlift for yourself or a loved one?  After listening to the founder of Castle Comfort Stairlifts,  Keith above, please take a few moments to read all about Alresford and the surrounding area.  It’s an armchair tour you’ll enjoy.
Or if you are in a hurry to get information on stair lifts, bookmark the page for later, and send in the enquiry coupon
- or call 023 8124 3046  (7am to 11pm)
Pretty Georgian Alresford
Close to Winchester, just 8 miles to the east lies Alresford , sandwiched almost in the middle between Basingstoke to the north and Portsmouth to the south; this pretty town has a population of just 6,000 people (2001 census)!
Historically Alresford, mentioned in the Doomsday Book, was a prosperous wool town in the Middle Ages and the 5th most important market for wool and leather.  It lost its status as a result of a dwindling population due first to the Black Death and later as a ‘dangerous place to live’ due to fire! Even these days more modern properties are never deemed safe from fire - even a show-house for stairlifts - however in This example, the house came worse off than the apparently fire-retardant stairlift inside!
There were frequent fires here and a major one in the 17th century razed 117 homes to the ground as well as the church and the Market House.  Much of the town was rebuilt by the 18th century giving Alresford its Georgian appearance which remains today.
Fortunately Black Death and fire aren’t particularly prevalent in Alresford today!  But you might be experiencing difficulty in remaining as mobile as you’d like to be, so let Castle Comfort Stairlifts help!  We can assess what you need and help you find a grant if needs be, to give you access to your entire Georgian pile.
As for trade, Alresford is now known for its watercress.  How times change!  The surrounding clear chalk streams with their constant temperature make it perfect for growing watercress; Alresford is the hub of the industry in the UK.  Alresford is also the home to the Watercress Line aka the Mid-Hants Railway, an old steam railway which was first used to transport the locally grown watercress to the London markets.
Now the Watercress Line just ten miles long, runs normal services through the picturesque Hampshire countryside between Alresford and Alton.

The Watercress Line
Alton another market town is home to Treloar College, the national specialist college for young disabled people.  This is a sixth form college with limited places.
It’s also where the phrase ‘Sweet Fanny Adams’ originated!  Back in 1867 eight year old Fanny Adams was murdered in Alton.  At around the same time rumour has it that the navy introduced tinned meats to their rations.  Sailors were said to have claimed the meat was that of ‘Sweet Fanny Adams’.  The phrase has also been shortened to ‘Sweet F A’ and has come to mean ‘sweet nothing’!
Fortunately the youngsters at Treloar College who need help with their disabilities in the form of stairlifts won’t feel there is sweet F A that can be done about their mobility.  Castle Comfort Stairlifts are in the business of making things easier.
As watercress is such a big part of life in Alresford, you won’t be surprised to hear that they have an annual Watercress Festival on the third Sunday in May.  The festival focuses on a street market with other local produce as well as fresh watercress, watercress scones, watercress pesto, watercress burgers and sausages; cookery demonstrations, a watercress eating competition and more.
12,000+ visitors pour into the town for this free festival when all the roads into the town are blocked off.  Here below is a watercress burger to whet your appetite. 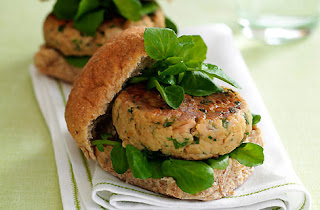 And when you’re bored with watercress, you can always take a stroll along The Millennium Trail.  The trail links footpaths around the town signed with boards full of information about the history of Alresford.
The walk is about one mile long and is suitable for wheelchair users too.  So those of you who aren’t so mobile can still enjoy it.  As well as the beautiful countryside you’ll pass The Fulling Mill and Eel House, St John’s Church and Old Alresford Pond which dates back to the 12th century. 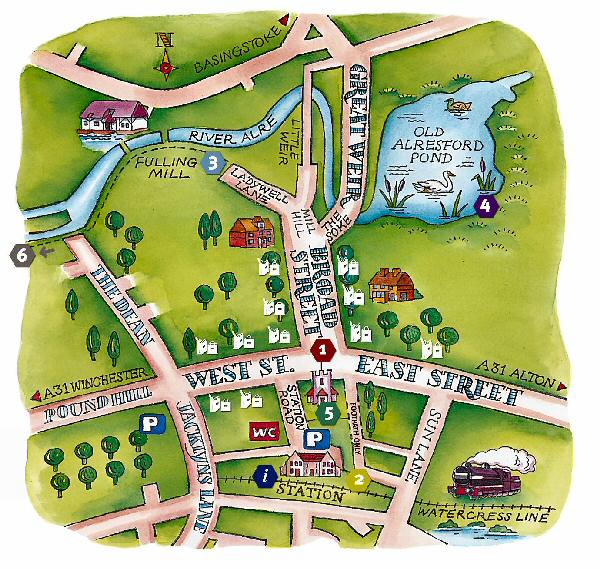 Did you know that Alresford had one of the strongest cricket teams in England in the 18th century?  No wonder John Arlott the famous voice of cricket was drawn to live here during the 1950’s and 60’s, comedian Russell Howard is a ‘son’ of Alresford, Alexa Chung the model attended Perrins Secondary School in Alresford, and the great, great grandson of First World War prime minister David Lloyd George lives in Alresford – he has the same name as his great, great grandfather by the way.
Prime Minister David Lloyd George remained active into his eighties.  In fact he married his long-term mistress in 1943 when he was 80.  If you aren’t as active and need help with mobility, Castle Comfort Stairlifts can help! 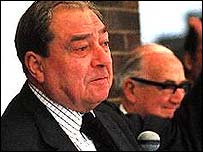 Russell Howard
We hope this armchair tour of Alresford and its background has been of interest.  For those of you who now need a rest but need help to get up those stairs, maybe Southampton Stairlifts can offer a solution!
Give us a call to discuss stairlifts and installation by our team of trained professionals from your local office.  One of our surveyors could visit you to assess your needs within the next 24 hours.  Call us now on 023 8124 3046 and don’t forget to use our '£50 off'' stairlift coupon!
Finally, if we have missed off anything really important that deserves a mention - please 'tick us off 'in the comments box below.  We'll put it right.