Hello to all of you in Hampshire and particularly in Portsmouth, I'm Keith the founder of Castle Comfort Stairlifts.  I have an important message for you which you can hear in my video above.  Castle Comfort Stairlifts are the national agents for all makes of stairlift and can advise you on which one is right for you both in style and budget.
Please give us a call on 023 9239 5095.
Now let's learn a little about Portsmouth in Hampshire – well it likes to get charted!  It gets listed and ranked over and over again!
High ranking
Its located in one of the ceremonial counties of England, Hampshire which means it has a Lord Lieutenant; it's the only island city in the UK – built mostly on Portsea Island; it is the only city in the UK with a larger population density than London and it combines with Southampton – the biggest Hampshire city – to form a metropolitan area ranking it eighth in population (more than 1.5 million).  The metropolitan area stretches from Salisbury in Wiltshire to Bognor Regis in Sussex.  It is the 14th largest urban area taking in neighbouring towns and districts of Fareham, Portchester, Gosport, Lee-on-Solent, Waterlooville and Havant.
Portsmouth Harbour Aerial view of harbour
Portsmouth has a long line in naval history stretching right back to 1200.  It is still a naval port to this day and famously it has one of the oldest dry docks which currently houses the HMS Victory, Lord Nelson's flagship and now a tourist attraction and also HMS Warrior.

Portsmouth sits just 64 miles south of London and 16 miles east of Southampton, and is nicknamed Pompey like its Football Club.
History
Portsmouth is steeped in history; not so surprising as it is a port so it has long connections with the Royal Navy, with the British Fleet and famous sea journeys.  Portsmouth is built on an old Roman settlement (Portus Adumi), and is probably home of the British Fleet in history (Classis Britannica).  It was founded in 1180 although earlier records of its existence are thought to have existed but been destroyed by Norman conquerors (Norman Conquest).   It doesn't even feature in the Doomsday Book though nearby districts later to form parts of Portsmouth do.
Royal Connections
Many Kings have a connection with Portsmouth which I suppose is only to be expected considering its proximity to London and its nautical background.
Richard III (The Lionheart) gave Portsmouth its first Royal Charter allowing them to hold courts, excusing them from the annual tax and permission to hold weekly markets and a three week annual free fair.
King John established the naval base at Portsmouth as a result of his desire to invade Normandy.  A hospital (St Nicholas) was erected at this time which served as an almshouse and a hospice.
King Henry II and Edward I used Portsmouth as the base for their attacks on France.
Edward III gave the city funds for rebuilding after a French invasion destroyed much of the city.
King Henry V built the first fortifications of Portsmouth including a round tower made of wood.
King Henry VII rebuilt the fortifications in stone with a square tower.  During his reign the first dry dock was built here too.
Henry VIII – we knew he'd be here – built Southsea Castle funded by money from the dissolution of the monasteries!
Henry VIII 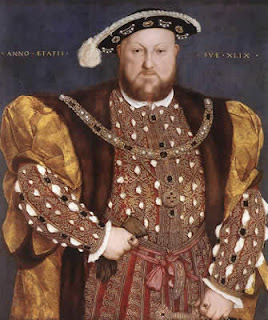 Of course we all know that Henry VIII is not only famous for his six wives but also as the inventor of the first stairlift (stairthrone) – a true prototype!  As he got older and following a leg injury whilst jousting, Henry became so obese that getting around became more and more difficult; the Daily Mail article that brought this to our attention suggests that Henry would be winched up stairs using a block and tackle type of mechanism and wheel chaired elsewhere.
Fortunately things have moved on since his day and we can now offer rather more sophisticated models to make stairs accessible.  So if you live in the Portsmouth area or anywhere in Hampshire, and need help to climb the stairs, please give Castle Comfort Stairlifts a call on  023 92 39 5095.
Famous sons and daughter
Portsmouth also has a rich history in celebrities.  It was the home of 19th century author Charles Dickens,  Sherlock Holmes author, Arthur Conan Doyle, Rudyard Kipling poet and author of The Jungle Book, science fiction author H G Wells, Nevil Shute and more recently children's author Michelle Magorian from Southsea.
Charles Dickens Comedian Peter Sellers famous for Inspector Clouseau in The Pink Panther was born in Portsmouth, but you don't need to be a policeman to find out where the best stairlifts prices are to be found.  Just give us a call on  023 92 39 5095 for more information. Isambard Kingdom Brunel
Civil engineer Isambard Kingdom Brunel who built bridges, dockyards and railways, hails from Portsmouth.  Whilst performing a conjuring trick for his children he accidently swallowed a half-sovereign which was difficult to remove!  Forceps and a machine to shake it loose both failed; it was finally removed by turning him upside down whilst strapped to a board when it was jerked free.
Fortunately this experience didn't render Brunel immobile though he did have to go to Devon to recuperate!  If you are less mobile than you used to be it's not magic you need!  Just give Castle Comfort Stairlifts a call – we promise there'll be no strapping you to boards or turning you upside down.  We'll show you how a stairlift can give you back your freedom with no tricks at all.
So if you live in the Portsmouth area or anywhere in Hampshire please contact our local office or
call 023 92 39 5095 for more information.
If we've missed something you think we should have included please let us know!  There will be more to report about Portsmouth's rich history that's for sure.